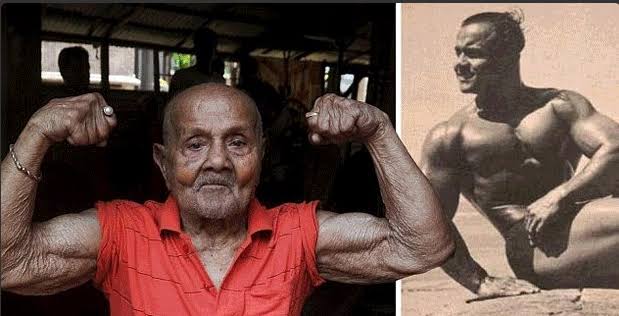 Men are at the forefront of bodybuilding. We have a lot of leading men in the men bodybuilding world. One of them is Manohar Aich – Father Of Indian Bodybuilding. But who says bodybuilding is only for men? Many women are equally performing bodybuilding and today there are many hottest female bodybuilder in the world.

Bodybuilding is not a cup of tea. It required regular efforts, more motivation, hard work, and patience. Motivation is the biggest factor behind every successful bodybuilder in the world. In this post, we’re going to share five things about Manohar Aich. He is the father of the Indian bodybuilder. He is worldwide famous for setting his benchmark in bodybuilding work. That’s why he is ideal for many youngsters who are willing to be perfect bodybuilders. So, let’s have a look at five things about Manohar Aich.

Manohar Aich, Father of Indian bodybuilder. He was born on March 17, 1912, in Bengal. He is the 104-year old former Mr Universe and the first bodybuilder to win the competition from India. He is also known as Pocket Hercules because of his short stature. He was on a liquid diet for the past few days and finally succumbed to age-related issues.

Manohar Aich’s journey started as a coconut vendor at Sealdah station. After lifting the Hercules title in 1950, he went on to win the Mr Universe competition on March 17, 1952. Apart from it, he also won three gold medals at the Asian Games and the world championship in spring pulled by tearing a 275-pound tension spring.

Manohar Aich used to have a diet of fruit, vegetable, milk, rice, lentil and fish. He was known to resort to smoking or not touching alcohol. He has always been interested in strength-related sports such as wrestling and weight lifting from a very young age.

Now, it’s time to dive into the five things about Manohar Aich.

Five Things You Should Know About Manohar Aich

Below, we’ve listed the 5 things about the father of Indian bodybuilding, Manohar Aich.

Manohar Aich joined the Royal Air Force as the physical instructor and with this started his tryst with bodybuilding. Reub Martin, who is a British officer in The RAF, encouraged him to start weight training. With dedication and hard work, he built his physique and was even praised by RAF officers for the same.

2- During The Quit India Movement, He Slapped A British Officer

When the Quit India Movement in 1942 was gaining momentum in India, Manohar Aich who was still working with RAF slapped a British Officer for his offensive remark against India. This led him to immediate court-martial and he was put in prison.

Manohar Aich utilised jail and started training with the support of the jailor who was kind enough to let him train.

4- He Was Selling Coconut In Kolkata

After his release, India became independent. Manohar Aich settled in Kolkata and started selling coconut at Sealdah railway station. However, he started doing private bodybuilding shows to raise money for the 1951 Mr Universe competition in London.

In 1951, he finished second in the competition but stayed back in London. He went to win the title next year at the age of 38.

5- He Trained Many Celebrities Bodybuilder

After the 1952 win, he tried his luck in Mr Universe’s competition again but didn’t succeed. So, he started doing several bodybuilding shows again. His last show was in 2003 when he was 89 years old.

Another Great thing You should Know About Manohar Aich

1- In his earlier days, Manohar Aich started performing super strength stunts like blending metal rods with his arm and neck, resting on sharp blades and walking by a majestic elephant. During this stunt, the famous magician P.C. Aich was shown with sarkar, which became a hit across the country.

2- In 1991, Aich tried his hand at politics when he contested the Lok Sabha elections as a BJP candidate – but the result was not favourable as he went down as the second runner-up with over 1.63 lakh votes.

3- The former Mr Universe has never touched smoking or alcohol, a definite factor contributing to his bodybuilding show till the age of 90 in 2003.

5- His hard work and dedication paid off in the year 1952 when he again participated in the National Amateur Body-Builders Association (NABBA) Universe Championships. Aich was successful in his second attempt and won the Mr Universe title.

6- He follows a simple diet. In an interview with Bodybuilding India on his 100th birthday.